Connecticut is home to three deepwater ports (Bridgeport, New Haven, and New London) and a multitude of small harbors, rail lines, and interstate highways crisscrossing the state. Connecticut is uniquely located at the intersection of maritime access and distribution networks, and a thriving maritime industry in Connecticut means stronger economic growth across each of these assets.

The Connecticut Port Authority is overseeing new investments in infrastructure, dredging and intermodal terminal capabilities that are expanding the foundation of Connecticut’s maritime industry and building a thriving network of efficient, customizable transportation solutions. 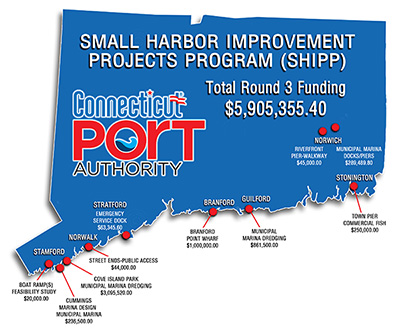 On April 19th 2022 the Connecticut Port Authority (CPA) issued a Request for Applications (RFA) for the third round of SHIPP grant funding. Applications were accepted through July 8th.

Eleven applications were received and ten met the qualification requirements of the program (one application submitted was for infrastructure not owned by the public sector and, thus, was deemed not qualified). Eight of the applications were from entities that had received prior SHIPP funding. Ultimately, ten projects in seven municipalities statewide were selected for a total of $5.9 million in grant funds.