Connecticut is home to three deepwater ports (Bridgeport, New Haven, and New London) where the bulk of Connecticut’s commercial maritime industry operates, as well as small and mid-size coastal and river harbors that also make important contributions to the State’s economy. From the terminals in New Haven, New London and Bridgeport to commercially successful ferry operations in Bridgeport and New London to major shipyards such as Electric Boat and the U.S. Navy Sub Base in Groton to numerous marinas to fishing fleets and boat repair facilities, Connecticut’s commercial waterfront is an important contributor to jobs, economic activity and tax revenue. In total, 24 municipalities in Connecticut have Harbor Management Commissions, and three municipalities (Bridgeport, New Haven, and New London) have existing port authorities. Connecticut’s coastal economy is broad and diverse. 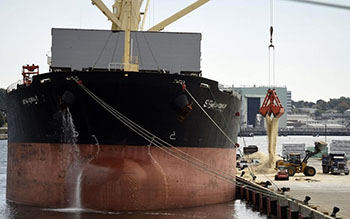 Like many ports throughout the United States, New London was hit hard by the economic slowdown of 2008-2009. Fortunately, those days are now behind us and, last year, Logistec had a record year of volume that moved through the port. The company is off to another record start for 2018, handling five vessels and over 100,000 tons of cargo in the month of January.

This increased volume and cargo mix has had a positive impact for the state. The more the port thrives, the more it contributes to job creation and regional economic development—just one of the reasons why the CPA promotes development of the state’s maritime commerce and industries is important via its ports and harbors.

Even with all the cargo coming into New London, the port finds room for ferries and a number of other businesses and community activities. State Pier is located near major shipyards such as Electric Boat and the U.S. Navy Sub Base in Groton, as well as United Technologies, Pratt & Whitney, and General Electric. Commercial fisherman can also make arrangements to dock at the port, and the facility is home to the annual Connecticut Maritime Heritage Festival. Stay tuned for more in future CPA newsletters! 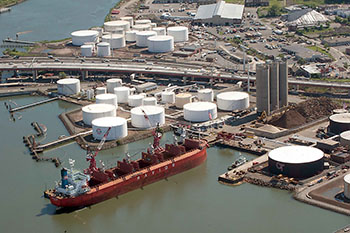 Considered the busiest port between New York and Boston, the port of New Haven is a crucial part of our state’s maritime economy. With seven privately-owned and operated terminals, New Haven is the gateway to New England and the primary point of entry for much of Connecticut’s heating oil and petroleum products.

New Haven is already the deepest of Connecticut’s three deepwater ports, accommodating ships with up to 40,000 tons of deadweight cargo. Thanks to an ongoing, three year study by the Army Corps of Engineers, New Haven’s channel may be getting even deeper. The Army Corps is currently exploring the benefits of the expanding the channel to between 37 and 42 feet in depth.

New Haven already boasts strategic connections to rail, interstates, and pipelines. The Buckeye Pipeline provides direct access to Bradley International Airport and the Massachusetts Air National Guard, while easy access to Interstates 95 and 91and rail service via Genessee & Wyoming make New Haven the ideal gateway to the Northeast, Canada, Mid-Atlantic, and beyond. 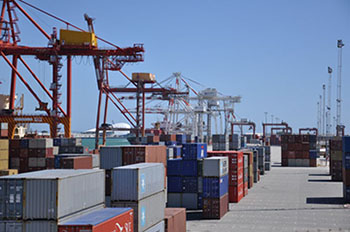 Ensuring the Future for All Aspects of the Maritime Industries

Located on the north shore of Long Island and on M-295 of the nation’s Marine Highway system, the Port of Bridgeport is comprised of two natural harbors, Bridgeport and Black Rock, both offering unimpeded access to Long Island Sound and convenient maritime routes to New York, New England and beyond. The ports of Bridgeport are strategically located off Interstate 95, and the 26, 27, 28 & 29 interchanges, are within close proximity of Connecticut routes 8 & 25, and 5 miles from Sikorsky Memorial Airport.